In recent years cultivation has sprung up along a 35-kilometre stretch of the Kamala river, bringing both opportunities and problems.

Bhotbul Rahen is having lunch with his partner Jhumrat Rahen, sitting on the sandbank of the Kamala river. For 30 years he worked as a tailor in Saudi Arabia, but when the pandemic struck he returned home. The sands where he had played as a child beckoned with opportunity.

"If we work the same hours here as I did in Saudi Arabia, I will feel I live like a king here as I can eat food cooked by my family, live with my children and share their happiness and sorrow, whatever comes in life," he said.

Bhotbul and Jhumrat started to grow vegetables on the sandbank this March, during the dry season. They are working on a 6,000-square-metre patch of government land in Kalyanpur municipality of Siraha district in southeast Nepal. They have three months to plant, grow, harvest and sell their produce: when the monsoon arrives, the river will rise and inundate the land.

"I do not know where the Kamala river will deposit sand for me for next year’s cultivation, but I am sure I will continue to adapt to its flow," said Bhotbul. He estimates his profits for three months of work growing watermelons will be around USD 2,000. Nepal’s per capita GDP in 2019 was USD 1,071.

While watermelons are the most popular crop on the sandbanks, farmers also cultivate bitter melons, bottle gourds, cucumbers, peas and courgettes.

Hundreds of families are adapting to sandbank cultivation on both sides of the Kamala. The practice has appeared along a 35-kilometre stretch of the river, from where the East-West Highway cuts across the river in the north, to the border with India in the south. Most of the farmers are from the buffer zones around the river, in Dhanusha district on the west side and Siraha district on the east.

Historically, silt farming was more common downstream, in India and Bangladesh. A decade ago, only a few farmers were involved in this form of cultivation along the Kamala. Now the whole area is being worked.

Madhav Dhakal, a hydrological analyst at the International Centre for Integrated Mountain Development, said that riverbed farming, or silt farming, "was introduced and targeted towards marginalised and flood-affected (due to riverbank erosion) communities".

"Degraded land was utilised to generate income for poor communities and also for families displaced by recurrent flood events," said Dhakal. "Extreme events like floods and droughts are common challenges but also increasing in frequency and intensity as a result of climate change. In that regard, riverbed farming can be an effective adaptation strategy for flood-affected farmers to generate income from state-owned land."

Sandip Subedi, horticulture development officer at Nepal’s National Centre for Potato, Vegetable and Spice Crop Development, said sandbanks are fertile land for growing crops. "The clay mixed with the sand retains moisture that can provide nutrients and water," he said.

The Kamala frequently floods, affecting both Nepal and India. To manage this, 14 years ago construction started on embankments on both sides of the river between the East-West Highway and the border with India. The work was completed two years ago. But the embankments meant the river could not spill over its banks and release the sediment it carries. As a result, silt built up on the riverbed and the river level rose.

According to Bikram Yadav, the coordinator of Save Kamala River Campaign, the rising level of the river led it to overflow its embankment in the Kamala area. In 2007, it flooded its old course.

The river was diverted back into the embankments, but the flooding created a huge wetland about 8 kilometres long along the Nepal-India border. It is now home to birds, wild boar and nilgai (blue bull), the largest Asian antelope.

As people have started to cultivate the land they have come into conflict with these animals, especially wild boar and nilgai. There is no management protocol, as the cultivators have no formal rights over the government-owned land. The government has so far ignored the issue.

Neba and Banarsi Das, from Paterwa village in Dhanusha district, have grown bitter gourd, watermelon and cucumber on the Kalama riverbank for 10 years.

"The cucumbers are ready now, I am harvesting them once a week to sell in the local bazaar in my village. We have to guard them 24 hours a day; if we are away, the herd of nilgai will eat our hard work in a few minutes. During the night the wild boars will destroy it," said Neba.

As the government promotes riverbed farming to build resilience in the face of climate change, the issue of conflict with wildlife is yet to receive the serious attention it is due.

This story was first published on The Third Pole. 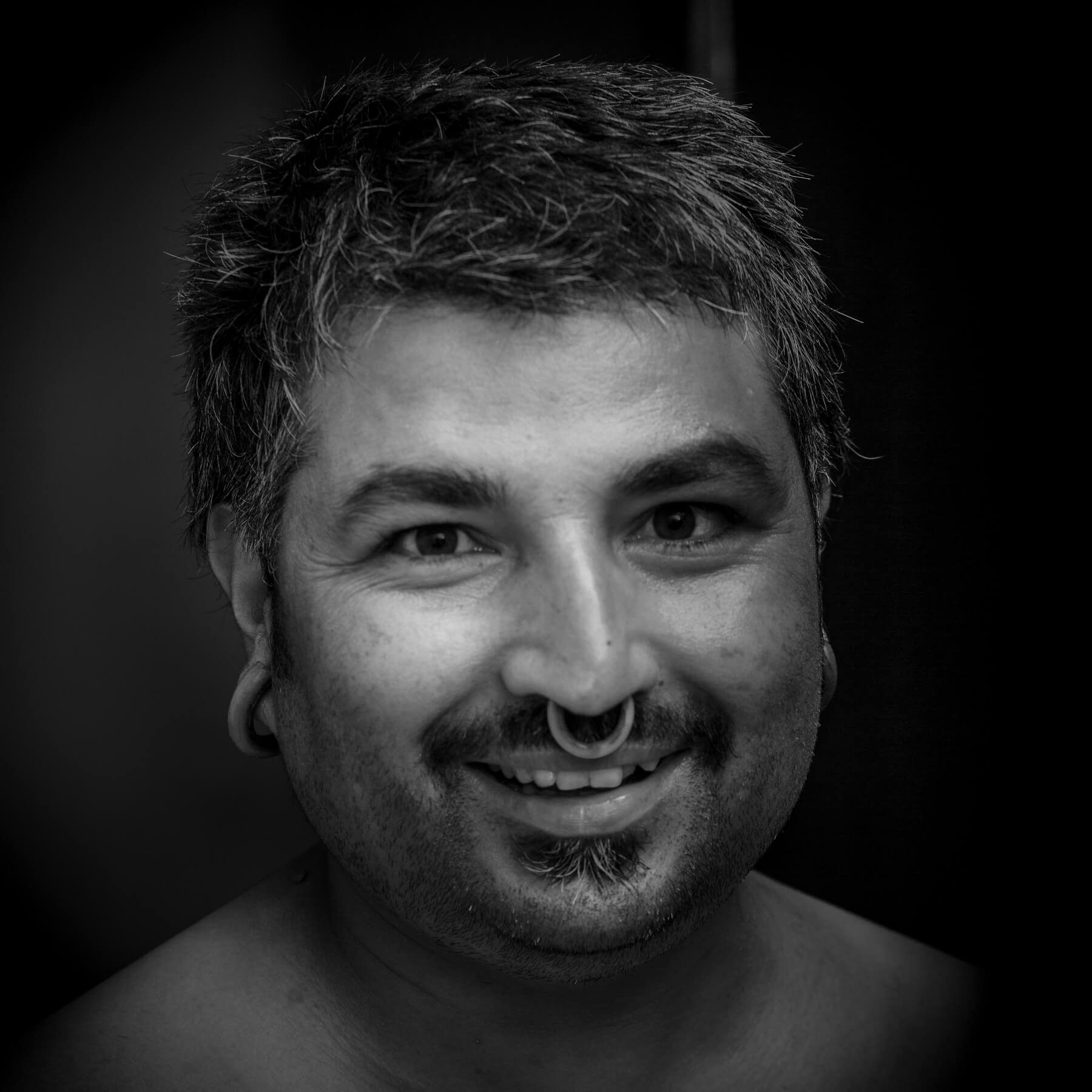 Nabin is a documentary photographer based in Kathmandu, Nepal.